SET has a higher success rate than DET

Transferring one embryo into women during in vitro fertilization (IVF) doesn’t lower their chances of giving birth but it does mean fewer women give birth to twins, with all the attendant health risks. (Double embryo transfers increase the occurrence of twin births from 1% to 30%)

In the past, it was recommended to implant multiple embryos in order to maintain high pregnancy rates, but improved technology has helped increase births when single embryos are used in younger women judged to have a good chance of getting pregnant.

Data for the five years of MET and SET showed that birth rates didn’t suffer – they actually improved.

With multiple embryos transferred, 51% of all women younger than 38 got pregnant and gave birth to a live baby, compared with 56% with one embryo transferred.

According to the study the difference has increased further.

Among 364 women who fit the criteria and had a single-embryo transfer from 2004 on, 65% gave birth to a live baby.

According to multiple studies, including a quite recent 2017 study from the University of Colorado and Duke University, transferring one, rather than multiple fertilized eggs doubles the chances of a healthy birth.

Risks to the Children of Multiple Births:

IVF with multiple eggs increases the odds of having twins or multiples, which in turn increases the chances that the babies will be born premature and underweight. The University of Colorado and Duke University collaborative study is the largest to date to look at outcomes of pregnancies using fresh and frozen donor eggs. The Colorado and Duke study is the first comprehensive comparison of the two methods, comparing outcomes for 30,000 patients who underwent IVF between the years 2012 and 2014.

(It was also found that there was no significant clinical difference in the success rates between fresh or frozen embryos. Since the use of a frozen embryo rather than a fresh embryo is a simpler process, the research suggests that frozen embryo transfers are just as viable of a choice for implantation when making decisions regarding your IVF transfer.)

While any pregnancy has risks, most risks are considerably increased with multiple birth.

Single deliveries are associated with:

With twin births these same risks increase to

Twin babies are seven times more likely to die in the neonatal period (from birth until 28 days) compared with single born children. As one would expect, with an increase in the size of the multiple birth (triplets, etc.) comes an increase in these risks.

Low birth weight and premature birth can affect survival and well-being of newborns. These babies may require special care immediately after birth and at times, can face life-long problems such as developmental disabilities and delays.

The risks of low birth weight and premature birth are not to be ignored as short term. They can cause numerous other long-term risks, which include prolonged hospitalization, mental disabilities, cerebral palsy, respiratory distress, visual issues, digestive disorders, hearing loss, jaundice, bleeding in the brain, neonatal death, and increased risks during adulthood such as adult death from heart disease.

Born prematurely, multiples may be possibly missing out on a period of in-utero development critical for grey matter development in the brain. As a result, prematurity has been associated with lower cognitive function as you can see in analysis that appeared in the Journal of The American Medical Association. 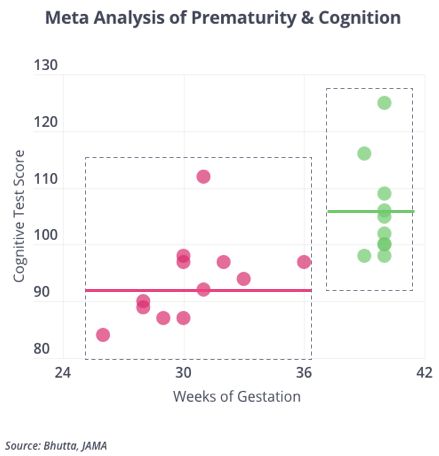 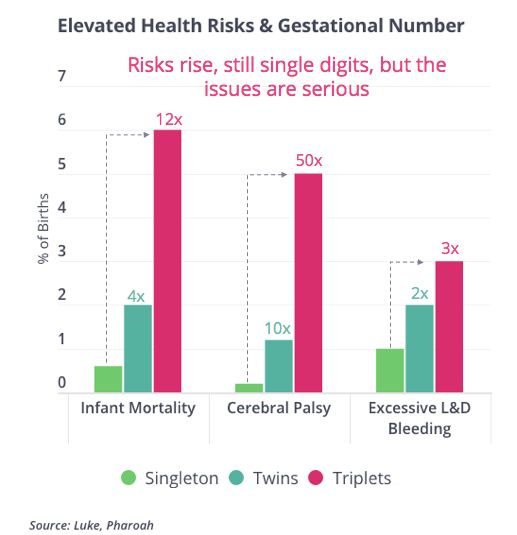 Currently, the CDC and the American Society for Reproductive Medicine’s (ASRM) guidelines recommend that only one embryo should be transferred at a time.