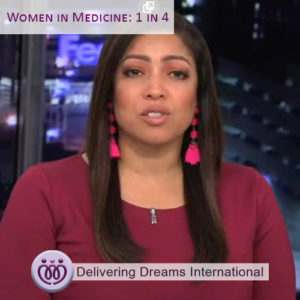 Women in medicine are suffering from rates of infertility double the national average. Why is this and what can be done?

Female doctors face a much higher rate of infertility compared with women in other professions.

Dr. Erica Kaye is a pediatrics physician, researcher, but likely her proudest title is “Mom.”

She and her husband welcomed their first child four years ago.

But Dr. Kaye held tightly to a secret.

“We had significant struggles with infertility for many years, as well as five pregnancy losses, and I grieved that journey very privately in large part to the shame and stigma,” said Dr. Erica Kaye, pediatrics physician.

Dr. Kaye broke her silence in a public way.

Her article, published in the New England Journal of Medicine earlier this month, was titled “One in Four” — a nod to a study completed in 2012 of 600 female physicians that found one in four surveyed suffered from infertility issues.

Dr. Kaye says female doctors have a much higher rate of infertility compared to other professions.

“Maybe up to double the rate of general population and probably even more than that,” she said.

It’s unclear why that is. Dr. Kaye suspects it’s due to female physicians holding off on conceiving until after medical school, and their day-to-day schedules could play a part.

Dr. Kay says the limited study on this issue is troubling. She says her article is a call to action for more studies, and bringing to the forefront for more employers to consider expanding fertility treatment options.

She says she’s aware how difficult it is for companies, but those treatments are how she finally got a successful pregnancy. With her second child, she took a different route — adoption.