Women are often overtreated for Fertility and Men are ignored 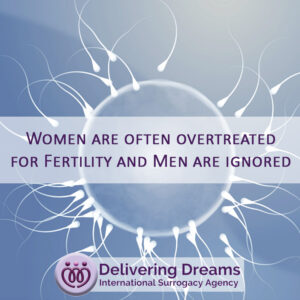 In the second half of the 20th century, the fertility industry bloomed, with the arrival of the birth control pill and development of in vitro fertilization (IVF), which allowed doctors to collect eggs from women and fertilize them in a lab for later implantation into the uterus. But treatments for male infertility never took off, partly as a result of these innovations focused on the female body, which in some cases allowed couples to leapfrog over the man’s fertility problems. Today, when couples first visit fertility clinics, the specialists they encounter are often gynecologists.

According to some experts and health care providers, this woman-centric approach to fertility has implications for men and women. Women are being overtreated and subjected to invasive procedures, while men aren’t getting the medical and mental health care that they need. And all of this is unfolding at a time when sperm counts are dropping.

And yet, when couples struggle to conceive, women generally bear the brunt of treatment. This is because advanced IVF techniques offer a relatively effective fix to fertility problems, but the approach places a burden on the female body that two scholars in Canada, Vardit Ravitsky, an associate professor of bioethics at the University of Montreal and Sarah Kimmins, an associate professor of reproductive biology at McGill University, characterize as “unjust,” even “scandalous.” In IVF, fragile sperm are deposited directly at the egg in a lab dish, allowing them to avoid the arduous journey up the fallopian tube. Some forms of IVF go a step farther: In intracytoplasmic sperm injection, or ICSI, a lab technician selects a single sperm and injects it directly into the egg, allowing it to bypass the challenge of pushing through the egg’s sometimes tough exterior.