‘It takes a lot of trust’: Surrogate delivers first baby of 2020 at UPMC Carlisle 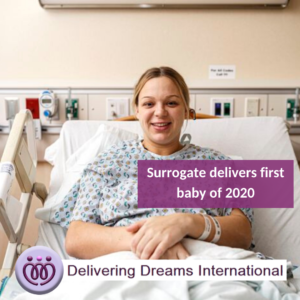 Sarah Groff knew several things when she gave birth to the first baby of the new year at UPMC Carlisle Medical Center on Wednesday morning.

Most importantly, she knew the 5-pound 7-ounce little girl wasn’t hers in the genetic, legal or any other sense.

And she knew that within a few days, the infant, Arianna, would be going home to Connecticut with her parents, Jovan Manero-Marrero and Emmanual Gonzalez- Rosado.

Groff, a 23-year-old Philadelphia native and mother of two who lives in Shippensburg, was the gestational surrogate for that married couple. For nine months, she carried another woman’s egg, fertilized by Gonzalez-Rosado’s sperm, in her womb.

So, the arrival of Arianna Marrero-Gonzalez by C-section at 8:30 a.m. on Jan. 1, 2020 was, for the staff at UPMC, even more of a novel and thrilling experience than simply delivering the first New Year’s baby, hospital spokeswoman Tracie Martin said.

It was quite a trip for Arianna’s parents, too.

“It was wonderful, very exciting,” Manero-Marrero said as he gazed at his daughter squirming in her bassinet Friday morning.

That excitement wasn’t dimmed by the fact that the couple had to drive from Connecticut to be in the delivery room and only reached Carlisle late on New Year’s Eve.

The journey to parenthood was long for Manero-Marrero, a Spanish teacher, and Gonzalez-Rosado, a doctor of internal medicine. They have been married for seven years and said they considered several alternatives, including adoption, before deciding on surrogacy.

“We were clear in our own minds that were going to have a family,” Gonzalez-Rosado said. “We wanted there to be a piece of us with this baby.”

The process, starting with a female stranger’s donated egg and a fertility clinic, “was a whole new world for us,” he said.

Yet, he said things quickly meshed when they first met Groff 11 months ago. “We were nervous. She was also,” Gonzalez-Rosado said. “It was an instant connection.”

“She was all that we could ask for,” Manero-Marrero added.

Groff has no regrets, either.

She said she made the decision to become a surrogate about a year ago after seeing ads online for the service and then doing some research. “I have two kids of my own and wanted to give that to someone who couldn’t have kids on their own,” she said as she recovered in a hospital bed.

Her father was leery about her decision at first, but her mother and the rest of her family were on board from the start, Groff said. During her pregnancy her 6-year-old son and 3-year-old daughter understood their own family wasn’t going to be expanding, she said.

Turning Arianna over to her parents isn’t emotionally difficult because she prepared herself for that moment from the start, Groff insisted.

“I’ve completed my own family,” she said. “From the beginning, I put my mindset that it’s not my child and I’m carrying it for somebody else.”

“It takes a lot of trust,” Groff said.

Even though he’s been in many operating rooms, Arianna’s delivery was a new experience for Gonzalez-Rosado, who is used to being the doctor in charge, not the father-in-waiting.

Groff said she knew she’d made the right decision the moment she enabled Gonzalez-Rosado and Manero-Marrero to become parents. “Just the look on their faces made it all worth it.” She said.

Both men agreed the surrogacy experience – the adrenaline rush, the worry, the long drives, the months of waiting and the hospital visits – was well worth enduring. They said they knew that for certain when they held their daughter for the first time.

Gonzalez-Rosado said the bill for the process came to around $80,000.

According to the Centers for Disease Control, 18,400 infants were born in the U.S. via the use of gestational surrogates between 1999 and 2013. By comparison, a total of roughly 4 million children are born in the U.S. every year.

Gonzalez-Rosado said Arianna’s next destination is Connecticut, where relatives who have seen her on video are eager to meet her in person.

As time goes by, and as Arianna grows and begins asking questions, Groff will remain a part of their lives, the couple said.

“We’re going to be sharing Arianna with her,” Gonzalez-Rosado said. “She’s a part of our family now.”

Groff said she’s willing to do it all again, but only with Gonzalez-Rosado and Manero-Marrero, who said they want to have at least one more child. She said that, by law, she has to wait at least a year before commencing another surrogacy because she delivered Arianna by C-section. The waiting period would be six months for a vaginal delivery.

“Hopefully, in the future I’ll give them a sibling,” Groff said.

You are not alone. We want to be your path to parenthood. Contact us to find out more about costs of surrogacy.