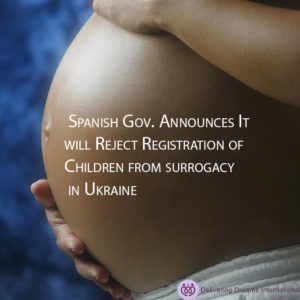 Since as long as I can remember the Spanish Embassy has been challenging. There have been precursors to this announcement for several years. In Spain surrogacy is illegal. These announced changes put the future of children to be born by pregnant surrogates for Spanish couples at risk of not being able to leave the country.

It is our personal opinion that the Spanish government will allow those intended parents in the process to exit legally before banning Spanish participation in international surrogacy completely, but no one can guarantee this.

This is why it is SO important to work with an agency that has a legal team and legal contacts within your home country to be sure – before you even start the process, that nothing will happen.

The Spanish embassy in Ukraine announced on Tuesday that the Spanish government had decided to begin rejecting registrations for babies born to surrogate mothers in Ukraine.
In the statement posted on Facebook, the embassy said that while a number of existing cases would be individually considered, “no new registration records of children born through the surrogate pregnancy technique can be authorised.”

This is not the first instance of Spanish authorities cracking down on international surrogacy.

Back in August of last year, dozens of Spanish families who had children via surrogate mothers in Ukraine were blocked from returning home for up to 10 weeks, with the Spanish government citing concerns of medical malpractice and human trafficking. One Spanish woman, Cristina Álvarez, who had a baby girl via surrogacy in Ukraine last year and was among those affected by the block, said circumstances had since grown worse.

“The situation is now much worse because when we arrived we all knew there were registration problems,” she said. Before, “people were going to register, but wouldn’t receive a refusal. We already knew what we were playing with, but now they are being much more unfair.”

Much of Europe has outright banned surrogacy, including Spain, while other countries such as the UK and Portugal outline strict restrictions. Ukraine, however, is quite relaxed on its laws, allowing surrogacy for heterosexual couples that are either Ukranian nationals or foreigners. Significantly, the law in Ukraine states that the baby belongs to the “intended parents” and the surrogate mother has no parental rights from the moment of conception. It also does not place any limit on how much a surrogate can be paid.