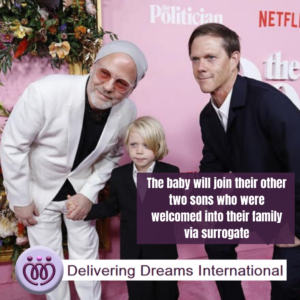 The American Horror Story creator has revealed he and his husband David Miller will become parents to a baby boy in August this year.

The new arrival will join their other two sons Logan, seven, and Ford, five, who were welcomed into their family via surrogate.

Murphy announced the news in an article he wrote for Architectural Digest, in which he gave readers a look inside his family homes in Los Angeles and New York.

Toward the end of the article, the Glee producer wrote: “I feel an attack of colour and Legos and bright Magna-Tiles coming on. We are expecting another baby, a boy, in August.”

Murphy also opened up about becoming a parent and how welcoming children into his life forced him to rethink his design choices within his home, writing: “With family life came more colour (children’s toys are never tasteful beige) and more collections and just…more.

He added: “My career took off right around the time we had Logan, in 2012, and I went from one or two shows to sometimes 12. Those shows, too, were often colourful and baroque. One day, it suddenly dawned on me that I wanted to live with less: less colour, less clutter, fewer things. An edited life.”

The couple’s third child will arrive one year after their son Ford was declared cancer-free after being diagnosed with neuroblastoma – a rare type of cancer that mostly affects in young children – in 2016, when he was just two-years-old.

Speaking after Ford was given the all-clear, the Pose creator said: ”Three years ago my beautiful son Ford went for a standard typical 18 month exam.

Revealing that his son has beaten the disease, he added: “I am so proud to proclaim that he is cancer-free.”

The Hollywood creator has previously opened up about the type of father he is, admitting that he is “the biggest pushover”.

Speaking to Entertainment Tonight, he said: “I thought I was going to be the great disciplinarian, completely rigid. And I am shocked to tell you that I am the opposite. I am the biggest pushover. I’m the biggest softie.”

He continued: “I have a really, really busy life but I still make it home every day, you know, to put them to bed and to give them baths. I feel, like, what has been very important to me with our kids is encouraging a very strong sense of imagination, you know, and storytelling particularly.”

Delivering Dreams helps couples throughout the world struggling with infertility have children. Located in NJ and Kyiv and Lviv, Ukraine, our amazing medical facilities and professionals, surrogates and donors are in Ukraine, because Ukrainian law protects the rights of parents and their children from inception at affordable costs anad high success rates.

You are not alone. We want to be your path to parenthood. Contact us to find out more about affordable surrogacy.