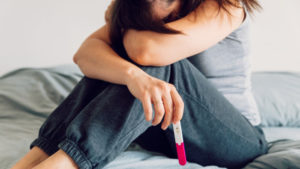 When people used to ask Mrs. North Carolina Nichelle Sublett why she hadn’t had children yet, she would force a smile and lie. She thought her infertility story was shameful, embarrassing, difficult. Being unable to get pregnant made her feel like she was a failure at motherhood, at being a wife, she said.

The Charlotte resident avoided a lot of otherwise awkward conversations with a “well, hopefully someday,” response.

Then in one moment, she knew that she not only needed to begin telling her truth — that she wanted children desperately and had been unable to have them yet — but she needed to do it so loudly the whole world could hear.

The first time she told her story out loud was in a social media post she’d written months before she shared it. “I always knew I would eventually tell my story,” she said. “I just figured it would be after I had the ‘perfect’ family — the two kids and a dog.”

The more she thought about it, the less it made sense to wait to share her story only after a happily-ever-after. “There’s a lot of power and resilience in the middle of it,” she said. “After I pressed enter on Instagram, I immediately felt like I was running around naked and like everyone knew my deepest, darkest secrets.”

The response was overwhelmingly so good that she has started the hashtag #StartAsking in hopes that others will share their stories. She wants to educate the public on what not to say to women or couples that may not want to discuss their fertility challenges. She wants to help women find their voices to start asking their doctors questions earlier.

She also wants to bring awareness to the fact that black women suffer from infertility issues.

Sublett and her husband got married in 2013. She was 30 when they got married, and she said in being mindful of her age, she stopped taking the pill right away.

After difficulty getting pregnant, Sublett was eventually diagnosed with Polycystic Ovary Syndrome (PCOS), a health condition that affects about 10 million women worldwide. PCOS is a leading cause of fertility problems. She said it was difficult for doctors to diagnose as she doesn’t fit the profile of a PCOS candidate. September is PCOS Awareness Month; learn more about the symptoms here.

Clomiphene and letrozole are among drugs that have been recommended for PCOS patients to take when trying to get pregnant. Sublett has tried them both.

In fact, she has tried it all, she said. She’s tried yoga, acupuncture, even mantras. She’s tried gluten-free and dairy-free diets. She’s had Intrauterine Insemination (IUI) treatments and In Vitro Fertilization (IVF). She’s become pregnant naturally.

She’s actually been pregnant five times and she said it has felt like a miracle each time. After the excitement of hearing heartbeats, she’s faced the devastating grief of miscarriages.

One time Sublett found out she was pregnant was after she had decided to compete in the Mrs. North Carolina pageant. She wondered if she should still compete, but before she could decide, she had a miscarriage and a dilation and curettage (d&c), a procedure sometimes performed after a first-trimester miscarriage. She spent the weeks before the pageant grieving and crying, not going to the gym or preparing for the pageant like she had planned. The night of the pageant, she was still bleeding from her d&c and she was wearing a white gown — she said the entire experience was surreal but it all worked out.

When she was crowned Mrs. North Carolina 2018, she knew immediately she had to use this new platform for her voice to be heard.

“The moment that changed me, when I knew I had to speak out about the situation, was after I was crowned Mrs. North Carolina,” she said. Her unsuccessful run for Mrs. America last month only expanded her reach.

“During my interviews from Mrs. North Carolina, I spent time speaking to each judge about how passionate I was to get my infertility story out into the public. I wanted to put a face and a voice to this disease and also show people that women of color suffer from this disease as well,” Sublett said.

In addition to her #StartAsking hashtag, Sublett has become involved in support groups including Resolve, Fertility For Colored Girls and Moms In The Making. “When someone can share that experience, there’s something powerful in that,” she said. “I’ve found good friends for life through these support groups.”

She’s also working on a podcast called #StartAsking, which she hopes to debut in the winter, where she will interview other women about their own infertility struggles.

She wants to educate the general public on what not to say:

One challenge with sharing her story publicly has been all the unwanted medical advice, she said. “Everyone has a sister or cousin who went through this,” she said, so naturally, people want to offer suggestions. They mean well, but Sublett said she’s most likely tried it all. However, the benefits outweigh. “We’ve had an outpouring of love and support. People rally behind us as a couple now.”

In her personal journey, Sublett and her husband have five embryos left, and they are deciding whether Sublett should attempt another IVF transfer or whether the couple should consider a surrogate. IVF is expensive and painful, she said, and it includes hormones and patches and painful injections in the backside over many weeks. “I go back and forth with whether I can do this again,” she said. “I’m trying to get my mind right.”

In the meantime, Sublett hopes that by sharing her story, she can help inform other women who may one day want to have children. If she had known in her 20s what she knows now, she said she would have frozen her eggs then. She hopes that other women will feel confident to share their fertility journeys, and she hopes that more public awareness will inform younger women to begin asking their doctors questions sooner and hopefully getting good results.

“It’s been really therapeutic for me, finding something positive in this. Being able to share and talk about it, helps heal me versus having it bottled up so long — it just weighed on me even more,” Sublett said, thought it’s still a daily struggle. “When you keep talking about it over and over, you don’t break down in tears anymore. It’s getting easier to say ‘This is what’s happened, this is what’s going on and this is how I’ve grown.’”

Delivering Dreams helps couples throughout the US struggling with infertility have children. Located in NJ and Kyiv, Ukraine, our amazing medical facilities and professionals, surrogates and donors are in Ukraine, because Ukrainian law protects the rights of parents and their children from inception at affordable costs and high success rates.

Our upcoming book, “Successful Surrogacy: Your Guide to Realizing Your Dreams of Parenthood Through Ukrainian Surrogacy” reveals the process, details and answers to empower you to start your Ukrainian Surrogacy Journey and ensure it will be an affordable, secure and happy experience.