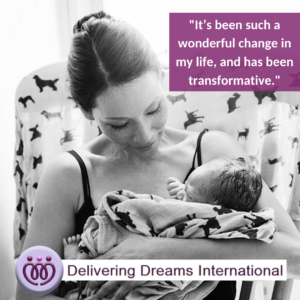 Mother’s Day is a time to celebrate moms everywhere — no matter what your family looks like.

Lucy Liu teamed up with Tylenol for their #HowWeFamily campaign to recognize the different ways moms become moms today. As part of the initiative, the usually publicity-shy actress opened up to Yahoo Celebrity about her journey to Motherhood Via a Surrogate. The Elementary star welcomed her son, Rockwell Lloyd Liu, in August 2015, via a surrogate.

“I’m a single mother who had a baby through a gestational carrier, and I know that people had opinions about how it was done,” she told Yahoo Celebrity. “And I think it’s really important that people also embrace that it’s not about those details, it’s about how you carry on from the point of having your child and loving your family.”

Those opinions were expressed through good old social media.

I didn’t [feel judgment] until people said, ‘Disregard what these people are saying on social media.’ I was like, ‘I didn’t realize people were saying anything on social media!’” Liu recalled. “I don’t review everything that people say. Generally, if I post something I don’t go back and look at it again because, you know, everyone is going to have an opinion.”

She continued, “But I was surprised when some of my friends told me that. I thought, ‘How can anyone have any discouraging words for a baby? For having had a baby.’ I find that really shocking, and I felt it was strange and odd in this day and age that people would have a negative slant on someone having a family, or having the judgment on how someone had a family.”

So what was it that inspired Liu to become a mother last year at the age of 46?

“I’ve been working with UNICEF for the last 10 years and have visited and gone on missions with them to several different countries and have met the most beautiful, warm, gorgeous, friendly babies and children all over the world,” she explained. “I have to say, there is something incredibly special about children. There is an openness and sharing and love they give to you in a matter of seconds. That is something that you start to lose, as you get older, for whatever reason.”

She added, “I think, for me, I was so passionate and so directed in working on my career and was sort of nonstop [that] it never occurred to me that time was flying by. Only when my friend said, ‘You know, maybe you should consider doing this,’ I was like, ‘Oh, yeah!’”

For the Charlie’s Angels actress timing was everything.

“I felt I was in a really good place and I was really happy being in one place. When I was younger, I was traveling so much, just back and forth. I took [Elementary] knowing that I would like to sort of settle down and maybe think of having a family,” she said. “It’s given me the ability to take a moment, take a breather, and in that time I was able to then make the decision to go ahead and do it. And it’s been monumental, he’s amazing. Every single day there is something new and something special.”

As for Rockwell’s latest milestones, Liu says that every day “something miraculous is happening.”

“He’s crawling, he’s pulling himself up, and his teeth are coming in now,” she gushed. “It’s hysterical to see the progression of even watching him move. … It’s really like watching how there is a real circle to life and the flow of life through a child, through a baby.”

So how will they celebrate their first Mother’s Day together?

“I’m going to celebrate by not multitasking and just spending the day with him and not doing 100 other things at the same time,” she laughed. “Mother’s Day will be about simplifying!”

Liu added, “I want to say that I think it’s important that a huge brand like Tylenol embraces and supports [this campaign], and encourages and inspires other people. I don’t know if I would have been able to [become a mom] had I not seen other people either adopt, or have their own children on their own and see that it’s completely possible. If this inspires other people to do it, then great. It’s been such a wonderful change in my life, and has been transformative. I’ve seen other people question it and see if it’s really possible, and it is.”