Kim Kardashian and her surrogacy story 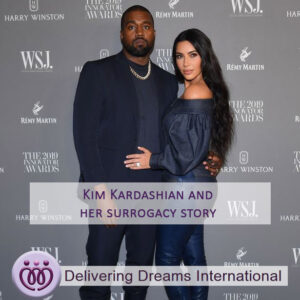 “I had something called placenta acreeta where the placenta grows inside your uterus,” Kardashian shares with US Magazine about her first pregnancy. “It’s honestly what people would die from in childbirth… So, there’s no choice — this is so graphic and gross — but he had to literally cut the placenta off with his hands, with his fingernails, inside of you. And it left a hole in my uterus, and so that muscle doesn’t grow back. So I could not get pregnant with Saint.”

Because of this, Kardashian used an embryo to carry her eldest son, then surrogates for Chicago and Psalm.
She also told the magazine that she “still wished” she could have carried Chicago. “The control is hard at the beginning. Once you let that go, it’s the best experience. I would recommend surrogacy for anybody.”
“It’s crazy how … instantly when the baby came out, there was no weird feeling that I was so nervous about, [like] ‘Am I gonna feel the same way?’” Kardashian confessed on a September 2018 episode of KUWTK. “It was the same exact feeling… That was instantly a relief for me, because that’s what I was most nervous about, and I just feel lucky that I’ve had such a good experience with surrogacy.