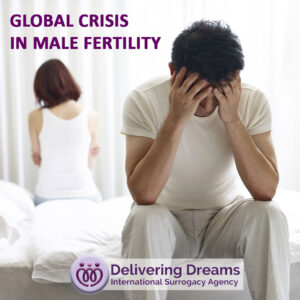 We face what some scientists have called “a global crisis in male reproductive health.”

Sperm counts have dropped by more than half in Western countries over the past few decades, while abnormalities in men’s reproductive systems are on the rise, and the quality of sperm has also deteriorated, battered by pollution, plastics, and poor diets. Chemicals present in everyday objects like canned food, water bottles, and kids’ toys have been linked to degraded semen quality, while air pollution is also known to harm sperm (and has been shown to impact women’s reproductive health). A man’s age and weight have also been linked to poor quality sperm.

Writing in the Journal of Andrology last year, Christopher De Jonge, director of the University of Minnesota Medical Center’s Andrology Program, and Christopher Barratt, head of the Reproductive Medicine Group at the University of Dundee in Scotland, argued passionately for action to protect men’s reproductive and general well-being. “Sperm counts may be a barometer for overall male health,” they wrote, warning that the decades-long decline should serve as a wake-up call for the medical community.