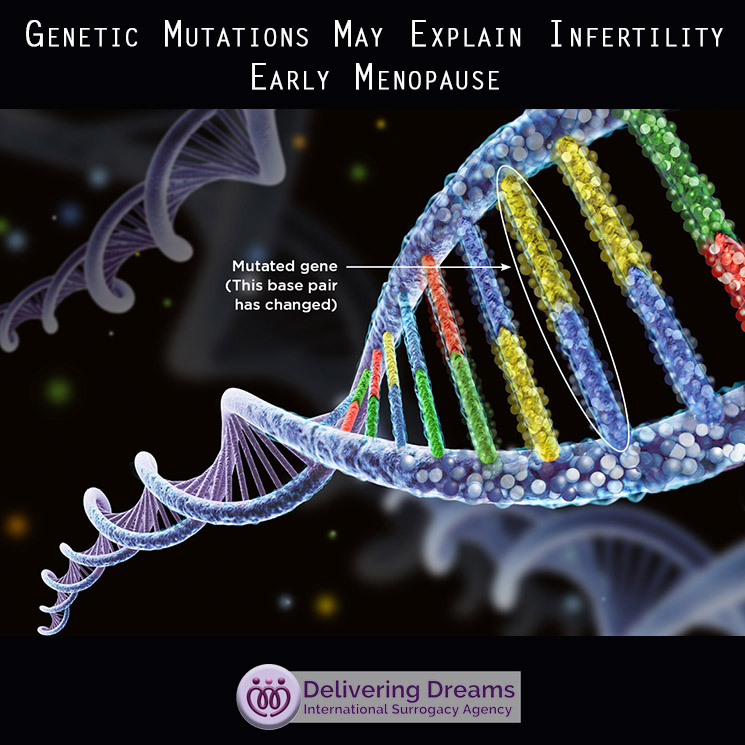 Genetic mutations found in humans, fruit flies, roundworms, zebrafish, and mice may be linked to fertility issues and early menopause.

September 01, 2020 – A team from Washington University School of Medicine in St. Louis has identified genetic mutations that may be associated with infertility and early menopause.
The study, published in the journal Science Advances, was initially conducted to find the genes involved with eye development in the early embryos of fruit flies.

“We blocked some gene expression in fruit flies but found that their eyes were fine,” said senior author Helen McNeill, PhD, the Larry J. Shapiro and Carol-Ann Uetake-Shapiro Professor and a BJC Investigator at the School of Medicine. “So, we started trying to figure out what other problems these animals might have. They appeared healthy, but to our surprise, it turned out they were completely sterile. We found they had substantially defective reproductive organs.”
The equivalent of this gene in humans is known as nuclear envelope membrane protein 1 (NEMP1), and researchers noted that it is not widely studied.

The team found that when the gene is missing in fruit flies, roundworms, zebrafish, and mice, the animals are infertile or lose their fertility unusually early but appear otherwise healthy. In people, researchers found a link between mutations in this gene and early menopause.
Although it varied a bit by species, males and females both had fertility problems when missing this gene. In females, researchers found that the envelope that contains the egg’s nucleus – the compartment that holds half of an organism’s chromosomes – resembled a floppy balloon.
“This gene is expressed throughout the body, but we didn’t see this floppy balloon structure in the nuclei of any other cells. That was a hint we’d stumbled across a gene that has a specific role in fertility,” said McNeill, also a professor of developmental biology.

“We saw the impact first in flies, but we knew the proteins are shared across species. With a group of wonderful collaborators, we also knocked this gene out in worms, zebrafish and mice. It’s so exciting to see that this protein that is present in many cells throughout the body has such a specific role in fertility. It’s not a huge leap to suspect it has a role in people as well.”
Researchers used a technique called atomic force microscopy to poke a needle into the cells, first penetrating the outer membrane and then the nucleus’s membrane. The amount of force required to penetrate the membranes gives scientists a measure of their stiffness, the nucleus’s membrane was much softer.

“It’s interesting to ask whether stiffness of the nuclear envelope of the egg is also important for fertility in people,” McNeill said.

“We know there are variants in this gene associated with early menopause. And when we studied this defect in mice, we see that their ovaries have lost the pool of egg cells that they’re born with, which determines fertility over the lifespan. So, this finding provides a potential explanation for why women with mutations in this gene might have early menopause. When you lose your stock of eggs, you go into menopause.”

The team suspects that the nuclear envelope has to find a balance between being pliant enough to allow the chromosomes to align as they should for reproductive purposes, but stiff enough to protect them from the ovary’s stressful environment. With age, ovaries develop strands of collagen with potential to create mechanical stress not present in embryonic ovaries.
“If you have a softer nucleus, maybe it can’t handle that environment,” McNeill said. “This could be the cue that triggers the death of eggs. We don’t know yet, but we’re planning studies to address this question.”

Going forward, the team wants to investigate whether women with fertility problems have mutations in NEMP1. They have developed human embryonic stem cells that were given specific mutations in NEMP1 listed in genetic databases as associated with infertility.
“We can direct these stem cells to become eggs and see what effect these mutations have on the nuclear envelope. It’s possible there are perfectly healthy women walking around who lack the NEMP protein,” said McNeill.

“If this proves to cause infertility, at the very least this knowledge could offer an explanation. If it turns out that women who lack NEMP are infertile, more research must be done before we could start asking if there are ways to fix these mutations — restore NEMP, for example, or find some other way to support nuclear envelope stiffness.”