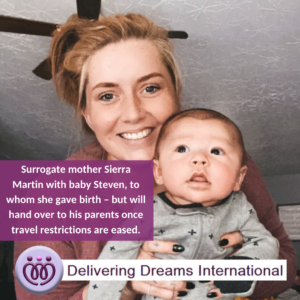 A week before Sierra Martin’s 27 February due date, she received an email. It was from the couple that Martin was carrying a baby for, as a gestational surrogate. This was Martin’s first surrogacy; she was carrying a boy for a gay couple from China.

Due to the coronavirus travel ban, the email read, the couple wouldn’t be able to get into the US to collect their son. Would Martin look after him, until the restrictions were lifted?

“I waited a full day before replying, because I didn’t know what to do,” says Martin, who is 22 and works as a barista and childminder in Lake Bay, Washington. “I have nothing to look after a baby!”

After thinking about it, she agreed. Martin gave birth to baby Steven on 23 February, and took him home. She is raising him alongside her two children, aged three and five, until his parents can get into the US, sort the paperwork, and bring Steven home to China.

Spending nearly three months raising a baby she has given birth to, but who she is not biologically related to and will be giving back to his parents eventually, is emotionally wearing. “I love having the baby snuggles,” says Martin, “but it’s definitely hard knowing that he is not mine. I love him, but I know that he has to go back to his own parents eventually.”

Martin and baby Steven are caught up in a nationwide surrogacy crisis of growing proportions. Commercial surrogacy is legal in some US states, making it a hotspot for parents looking to have children through assisted reproduction. But the coronavirus travel ban has seen President Trump close the country’s borders to almost all international visitors, while a nationwide US passport office shutdown has made it impossible for parents who do manage to get into the country to obtain the necessary documentation to take their children home.

As a result, babies are being born without their parents present at the birth (immigration authorities will only let parents in once the surrogate has given birth to the child). In at least one case, a mother flew from France to attend the birth of her child, only to be turned back by border control. Some parents aren’t being allowed in the country at all.

Surrogates and surrogacy agencies are scrambling to look after babies themselves. “It’s unprecedented for a surrogate to be looking after the baby,” says Rich Geisler, a Californian surrogacy lawyer. “We as an industry really try to avoid that. We want to avoid the possibility of the surrogate bonding with the child.”

Martin is adamant that she’ll be able to give Steven back to his parents when the time is right. “It will be hard to give him back, because I’ll miss him,” Martin says. “But I know he’s not mine, and that I have to give him up, which is totally OK with me.” She pauses. “But there’s definitely a bit of attachment there,” Martin says. “I care for him. When you love on a baby, you love on a baby.”

To avoid leaving children in the care of their surrogates, with the emotional challenges this can entail, some surrogacy agency workers are taking babies into their own homes. “I never anticipated something of this nature happening,” says Katie Faust, a 26-year-old surrogacy case worker from Tampa Bay. Faust is caring for a three-week-old baby girl, whose name we have withheld at her parents’ request.

When it became apparent that her parents, a heterosexual couple living in China, would be unable to collect her, Faust, her husband, and three children flew to California to collect the baby, rented a car, then drove for five days back to Florida. (As the baby doesn’t have a passport, they couldn’t take her on a commercial flight.) “We’re just kind of planning it as we go along,” says Faust. “We’re trying to figure out a way to get her reunited with her parents as soon as we can. But I’m OK looking after her, until they get here.”

For the parents on the other end of the coronavirus shutdown, there is an excruciating wait to meet their children for the first time. “I feel really sad about almost everything to do with my son’s birth,” says John, a 41-year-old airline worker from Shanghai.

John’s baby son with his partner Will, a 39-year-old finance worker, was born on 24 February: they have not been able to enter the US to meet him due to the travel ban. (Both men have requested anonymity, as they are not out to their employers.)

When Trump issued an order preventing Chinese nationals from entering the US in January, John wept. “I cried and cried,” he remembers. “It was really important for me to be there for the birth.”

Fortunately, Will’s elderly parents live in Portland, and are caring for the baby. “We speak to the baby by WeChat almost every day,” says John. “When I look at his photos or videos, I feel like my heart is melting.” But Will’s parents are elderly, and he worries what would happen should they, or the baby, fall sick with coronavirus – the baby is uninsured, as the shutdown means they can’t get the documentation they would need to insure him. John wants more than anything to get into the US and bring his son home. “Here in China, life is returning to normal,” John says. “I think the US government should open the border, so I can get my son. Most people here are healthy and do not have the disease.”

In addition to the logistical challenges of arranging care for a child you have never met on the other side of the world, the shutdown means that parents like John and Will are missing out on those precious early months with their children. Martin is sending Steven’s parents pictures and videos, but it’s not the same. “For Steven’s sake it would be nice for him to bond with his parents instead of with me,” Martin says. “Those first three months of his life are instrumental in the bonding process for the baby.”

And even if you can get into the US to collect your child, your problems don’t end there. Surrogacy is an expensive process. Having to wait in the US for the passport office to reopen – at the moment, it is only issuing documents for life-and-death emergencies, which do not include surrogacy – all add to the cost. “People are running out of funds,” says New Jersey reproductive lawyer Melissa Brisman. “They’ve already spent so much money on this. They can’t afford another £2,000 a week on a certified nurse to take care of the baby.”

You are not alone. We want to be your path to parenthood. Contact us to find out more about costs of surrogacy.